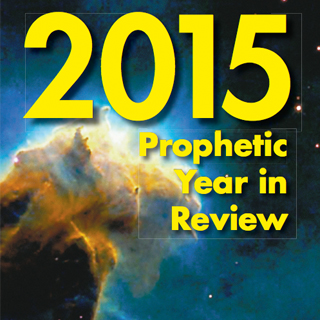 Hal Lindsey examines the dramatic new implications of 2015 in light of Bible prophecy. He looks at the rise of supra-national governments formed by climate agreements such as the 2030 Agenda, and trade agreements such as the Trans Pacific Partnership (TPP). Hal says, “Since at least the time of Nimrod, Satan has been trying to lay the groundwork for a one-world government — with his man in charge. 2015 may be remembered as the year his ancient project began to take shape.” Fear of climate change, terror attacks, and economic depression in 2015 drove world leaders to come together and give more and more power into the hands of fewer and fewer people. In his 2015 Prophetic Year in Review, Hal shows how power will continue to coalesce until it is eventually centered in two men — the Antichrist and the False Prophet. More than ever before, this has been a year of global instability. We have had a year of nature gone wild, more of wars and rumors of war, lawlessness in high places, and migrant movements that became invasions of Europe and the United States. And the scary thing is that most migrants are Muslims from the Middle East. In 2015, the nuclear duo of Russia and Iran inextricably tied themselves to one another in anticipation of fulfilling Ezekiel 38 and 39. Worst of all, they landed with massive force on Israel’s doorstep in Syria. Hal Lindsey’s 2015 Prophetic Year in Review puts the events of our time in a clear and meaningful perspective you will want to share with your friends and family! We are clearly moving rapidly toward the Rapture. Maranatha!